Did Tequila Terry Take it Too Far? Part 1

Part 1 of a multi-part series on when employers are required to investigate employee misconduct during non-work time.

The holiday season is here! There’s a fun, festive feeling in the air, cookies and sweet treats abound, and your employees are in pretty jovial moods. Everything seems bright and cheery.

Your company’s holiday party is right around the corner, and you know all employees are looking forward to letting loose and having some fun. You also know that anything can happen at these holiday parties, especially when the booze is flowing. So, while it might be tempting to chalk up Dave’s crude joke to him having had “one too many” or Sharon’s impromptu pole dance to “liquid courage,” should you really do so?

It may seem like a severe step to open an investigation based on an employee’s behavior at a holiday party, but sometimes it is necessary. Failing to investigate when you should can actually create even greater liability for your organization.

But how do you know when it is necessary to launch a formal investigation? In this series of blogs, we are going to look at an example of a holiday party gone awry. In this first blog, we’ll give you the background on what happened, and at the end, we’ll ask for your opinion as to whether an investigation needs to be opened. In the following blogs, we’ll discuss the best way to proceed in order to protect your organization.

So, let’s get to the story!

Ornaments ‘R Us has organized an all-out gala to celebrate the season, as well as to reward employees for a year of sky-rocketing sales. The event is being held at a lavish hotel near the office, with no expense spared. Since the event includes an open bar, the company has purchased a block of rooms so employees do not have to drive.

It is now 9:00 pm, and the party is in full swing. Employees are enjoying the abundant food and beverages. People are dancing. All seems to be going well.

Terry, a long-time employee and senior executive, has been enjoying the open bar . . . perhaps a bit too much. This isn’t unusual for Terry; indeed, his penchant for slinging back drinks when the booze is free has earned him the nickname “Tequila Terry.” Historically, when Terry has had too much to drink, he becomes very chatty and annoying, but is generally considered harmless.

Tonight, Terry is feeling pretty fine and wants everyone else to feel the same way. He spots Sarah, who just started with the company three months ago, sitting by herself at a table in the corner. He ambles over, sits down, and asks Sarah why she is sitting at a table all by herself. Sarah politely responds that she is enjoying some (relative) quiet and that she isn’t in the mood to talk right now. Terry thinks she is just being shy, so he tries to cajole her into talking. “A pretty girl like you shouldn’t be alone at a holiday party. Let me get you another drink and we can get to know each other.” Sarah responds, more adamantly this time, that she already has a drink and that she prefers to be left alone. Terry throws his hands up in surrender and says, “Okay, okay . . . I was just being friendly.” Terry walks away and, predictably, heads back to the bar.

A few tequilas later, Terry sees that Sarah is still sitting by herself. This time, he decides he will not take no for an answer. He heads back over to her table and opens with “Nobody puts Baby in the corner,” thinking that a nod to Dirty Dancing might loosen her up. Sarah politely smiles, at a loss as to what she should do. Terry grabs her arm and pulls her to the dance floor. Sarah tries to pull away, but Terry’s grip is firm with the force of countless tequila shots.

On the dance floor, Terry clumsily spins and turns Sarah in seemingly all directions. Their dance is causing quite a stir, and many others in attendance have stopped to watch. Sarah’s embarrassment and discomfort is obvious to all, except Terry. As the song ends, Terry dips Sarah, and as he pulls her back upright, gives her a kiss on the cheek. He then bows to the room, and some people clap and chuckle.

Becky, a co-worker who has befriended Sarah, sees how uncomfortable she is and helps her retreat to the safety of the restroom. Once inside the restroom, Sarah tells Becky the whole thing made her very uncomfortable. She expressed to Becky that she had felt trapped because Terry is a high-level executive and well-liked by everyone – and she’s the new girl. She also confided to Becky that Terry reminded her of her creepy uncle who got a little handsy when he’d had too much to drink.

Becky tells Sarah that she should go to HR. Sarah, however, is afraid to do so because she is so new to the company. She just wants to forget the whole thing happened.

Becky, however, could not forget. On Monday, Becky goes to HR and expresses her concern over what happened at the party. “I am not sure if anything can be done because this happened at the holiday party, but I know Sarah was really uncomfortable with Terry’s behavior towards her. And while I know that Terry is harmless, and it was probably the tequila talking, the whole thing just doesn’t sit right with me. Sarah was really upset.” HR thanks Becky for sharing her concerns and Becky leaves the office. 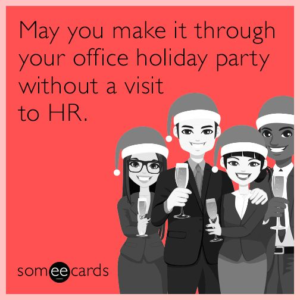